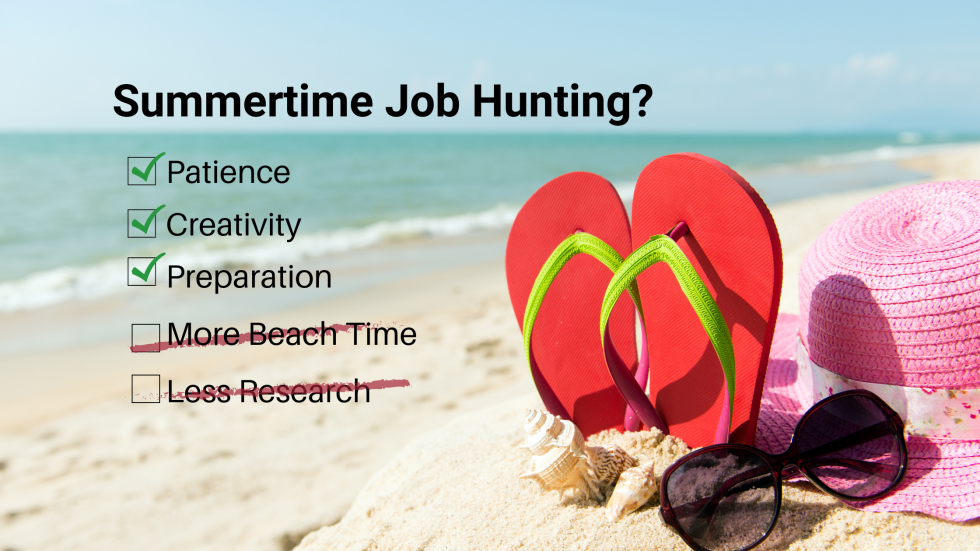 With the summer months being slower in the workplace, it typically isn’t one of the best times to apply for jobs.

Managers take more time off during the summer making it harder to get a team together to conduct a face-to-face interview or make hiring decisions.

If you’re job searching in the summer and can’t find a job, this lull in workplace hiring activity could be why.

Companies also fill many of their open positions during the hiring push at the beginning of the year (January-May), making it less of a push by the time the summer months roll around. Summer is also the time companies – large and small– hire interns and part-time staff, thus filling a short-term requirement for some positions and filling up the workload of the hiring professionals.

However, this doesn’t mean there aren’t any jobs to be had.

You might just have to search a little bit harder and be a bit more creative.

Working with a Career Coach will  help you develop your career strategy,  enhance your interviewing skills  and keep you motivated so  you don’t head off to the beach and leave your future job prospects in limbo.

The upside of applying in the summer? You might be able to stand out because there are fewer applicants during the summer months. Consequently, it’s still worthwhile to do some job hunting in the summertime.

The greatest attribute you can embody right now? Patience. With people away from the office and activity overall slowing occasionally to a beach-lifestyle crawl, don’t expect to complete an interview process in a timely fashion.

Picking up the pace in September and October provides better opportunity

September and October are one of the best times to apply for jobs (along with January and February as mentioned earlier). Why?

Hiring happens in waves. Summer was slow, so early Fall speeds up, especially as hiring managers return from vacation. This works well for you because the hiring managers are rested and refreshed and feeling a brighter future is in the offing.

But putting off your preparation until the Fall is not a good strategy. Setting yourself up for success but doing research now and getting practice with interviews, will put you ahead of the pack when those hiring bosses come back to the office.

Reach out to me and let’s get started on the plan that will see you through applications, interviews and culminate in nailing down the position you want.