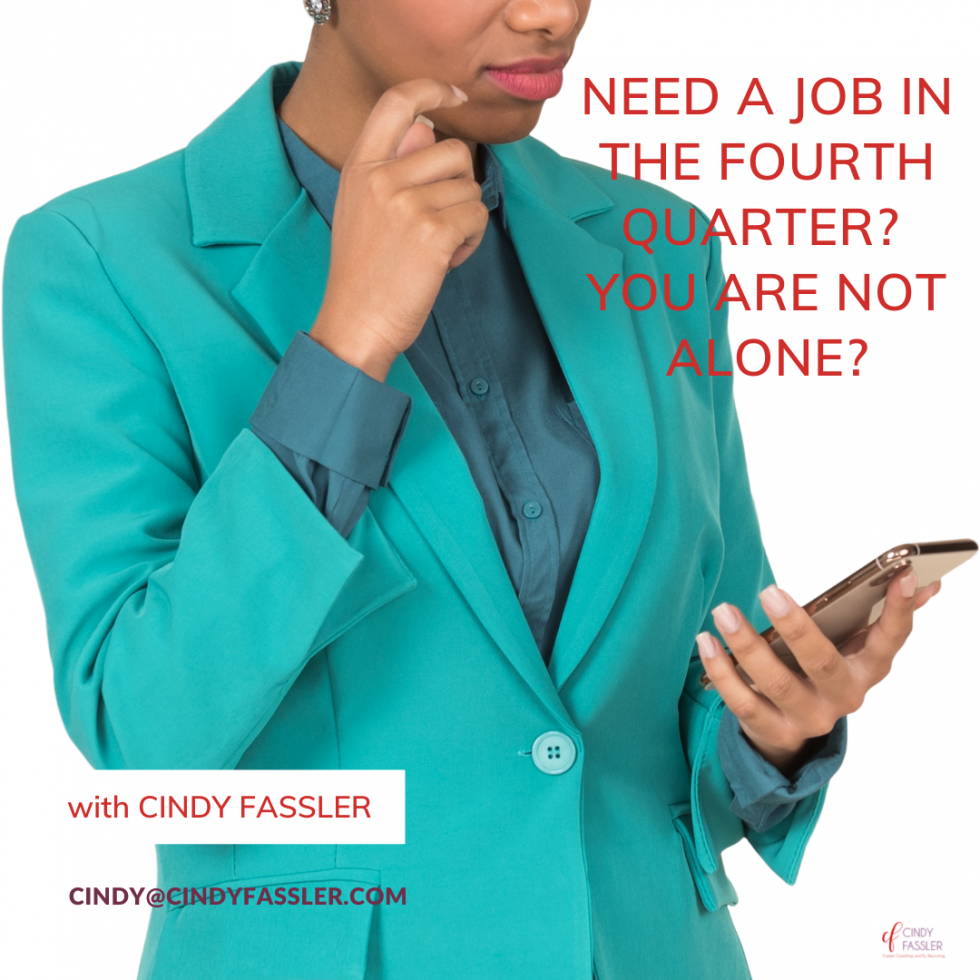 Need a job in the fourth quarter? You are not alone.

It’s common for companies to plan to hire at the end of the year. Some look to fill open jobs and others want to complete fourth quarter projects and/or prepare for the new year. Regardless of industry or size of the organization, this year employers will be faced with fierce competition since job seekers have many options in the steadily increasing candidate-driven market. Currently, in the US there are more open jobs then there are qualified candidates.

There’s a common misconception that no one hires during Q4. The reality, however, is that companies around the country are actively recruiting to have open positions filled for the new year.

As an Executive Recruiter some of my highest billing months were in November and December.

This is the perfect time for job seekers to get a foot in the door for many reasons. Here are just a few of them:

It’s All About the Budget

Perhaps the greatest myth surrounding the Q4 hiring slump is that most businesses have blown through their annual hiring budget. Some companies might be maxed out but there are plenty of employers who still have money left in the year’s budget. The time-honored adage of “use it or lose it” certainly applies in this scenario, and no company wants to leave money on the table when it comes to recruiting the best talent available. And if they don’t spend their head count budgets this year, they may find that they won’t get the same amount next year.

Companies that are also looking to get an additional tax break before the year is out are usually spending more on recruiting and the advertising costs associated with it during those last final months, so there’s no better time to get a jump-start on your job search.

Start the New Year Strong
It can take weeks to get ramped-up when you start a new job. That alone means that by October, many companies will be well on their way to making plans for the new year—and that often means bringing in new talent to help execute those goals. Instead of hiring someone in January, it’s much more beneficial to hire someone in the months before so their new hire can be fully onboarded and ready to contribute once the New Year begins.

Don’t forget that companies in many industries experience a slow period between Thanksgiving and Christmas. That’s the perfect time for a company to train new employees.

A Leg Up on the Competition
The common misconception that few companies hire during Q4 is something that works in your favor, and you’ll have better luck scoring interviews due to the decreased competition from fewer applicants. If you wait until January to start your job search in earnest, your resume may be drowned in the slush pile with the rest of the “New Year’s resolutions” job seekers. This can dramatically reduce your chances of landing an interview—no matter how qualified you might be.

Here is one more reason to focus your job search during Q4? You could benefit from a speedier hiring process. Lower applicant rates and lighter calendars can make it much easier for recruiters to schedule interviews with a hiring manager.

It’s a Job Seeker’s Market
The job market is stronger than it’s been in over a decade. That means as your recruiter I am in fierce competition for top talent, giving job seekers vital leverage when looking for new roles and negotiating salaries and benefits. That’s just one more reason why there’s no time like the present to double down on your job search.

This is a great time to hire me as your Career Coach to make the most out of this opportunity.

Do you need some accountability? Let’s do it together. Let’s get that dream job before the year ends and make some progress together.

Or send me an email at cindy@cindyfassler.com