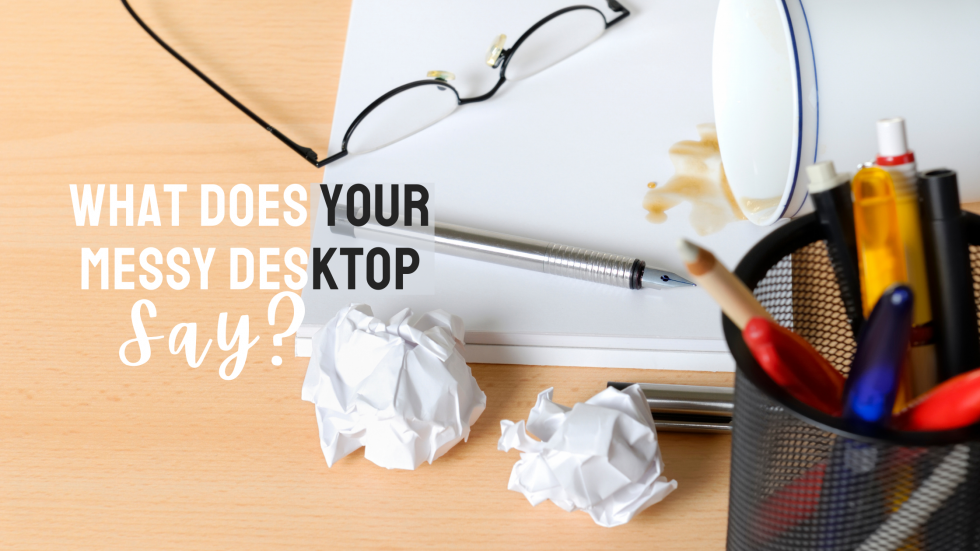 What does your desktop reveal about you?

You can tell a lot about a person just by looking at his or her desk.

After spending so much time working at your desk, whether it’s at a home office or in a corporate setting, that piece of real estate starts to become an important part of your life. And, like it or not, it begins to reflect your personality.

Even a casual observer can glance at your desk and tell a bit about your personality, your working style, and what occupies your heart and mind when you are away from that desk: hockey? Children? Dogs?

You can do the same by looking at your colleagues’ desks, which can help you work out who the organized one is in the office, who is most likely to have some snacks (hey, it’s important!), and who has some of the same after-work interests and hobbies as you do.

I would never, of course, suggest that merely glancing at a colleague’s desk could replace actually conversing with them to discover their habits, organizational abilities and after-work interests, but being conscious of how your own desk appears to others is valuable.

So what DOES your desk clutter, or lack thereof, say about you?

Looking for someone lively and loquacious for your next project? Look for the cluttered desk.

There’s always that one person in the office who is infamous for having a messy desk: leftover lunch, candy wrappers, papers strewn about, cables, meeting notes, printouts, and lots of questionable memorabilia.

For those people and others who might not be as offensive in their individual styles, the phrase ‘organized chaos’ is undeniable. Others are just described as chaos. Period.

As an executive recruiter working with all levels of corporate officers and employees, I’ve seen all the combinations of messiness and creativity.

At its worst, all that clutter might be a good indication that they are not the most organized individuals. So, if you’re working collaboratively with a colleague who is a bit messy, you might need to keep them on track and on task. If you’re the one with the messy desk, schedule a clear-out session every week or so. You will feel some relief as will your colleagues. Secretly, your officemates fear that your messy workspace might invade their own.

As I’ve described them, messy desks may sound like a huge harbinger of a distracted mind, but that’s not necessarily true.

If it’s organization is your primary objective, go to someone with a minimalist desktop.

An orderly desk with minimal items on it is usually a sign that someone thrives on structure; they need neatness in their workspace in order to be productive. This is always desirable when you have continuous deadlines or are working on ongoing projects across multiple teams.

More often than not, a minimalist desk is a practicality: excess items are only going to get in the way and stop you achieving your goals. Those who work hard and want to get the most productivity of their workdays are more likely to have desks clean and clear.

On the flipside, a squeaky-clean desktop can appear to colleagues that there is a lack of personality or a preponderance of sterility. No memorabilia? No family photos? It could appear you are not invested in the company and don’t have long-term plans for the current career path.

Finding a balance between personalization and minimalism is ultimately desirable.

But of course, there are many exceptions.

I would never suggest that you base your opinion of a colleague’s work habits and reliable solely on the appearance of his/her workspace; that’s when the conversations and performance will determine the true nature of the person.

Are YOU a cluttered-desk worker or are you a minimalist ?